Various display options are available from the main section of the 3D view page:

Rotate the view around the center of the canvas Translate the view and move the center of rotation Zoom the view in and out Show information (tooltips) about the object close to the mouse cursor or finger tap such as atoms or bonds Move the clipping/focus planes in and out Increase/decrease the isolevel value of the selected electron density map Combination "Move the clipping/focus planes in and out" and "Zoom the view in and out" Distance, angle, dihedral measurements: To begin a measurement, use the right-mouse button (or the left-mouse button and the Control key/Control key and mouse click) to select 1, 2, 3 or 4 atoms. Complete the measurement by selecting the final atom twice. Depending on how many atoms are selected, the distance (2 atoms), the angle (3 atoms) or the dihedral angle (4 atoms) is measured and displayed. Deselect all atoms with a right-click in empty space. To remove a measurement, re-select all involved atoms and then the last atom twice in a row.

Various display options are available from the Structure View tab of the 3D view page:

For By Density Fit, By Geometry Quality and By Random Coil Index. See Validation Report section for details.

Protein symmetry refers to point group or helical symmetry of identical subunits (>= 95% sequence identity over 90% of the length of two proteins). While a single protein chain with L-amino acids cannot be symmetric (point group C1), protein complexes with quaternary structure can have rotational and helical symmetry.

Complexes are considered symmetric if identical subunits superpose with their symmetry related copies within <= 7 Å Cα RMSD. Protein subunits are considered identical if their pairwise sequence identity is >= 95% over 90% of the length of both sequences, to account for minor sequence variations such as point mutations and truncated or disordered N- and C-terminal segments. Protein chains with less than 20 residues are excluded, unless at least half of the chains are shorter than 20 residues. Nucleic acids and carbohydrate chains, as well as ligands are excluded. Split entries (entries divided between multiple coordinate files due to the limitations of the PDB file format) are currently excluded from the protein stoichiometry and protein symmetry features.

Global symmetry refers to the symmetry of the entire complex. Protein complexes may be symmetric, pseudosymmetric, or asymmetric.

Structure View: Color (By Density Fit and By Geometry Quality) and Clashes option

wwPDB Validation Reports are available for every entry in the archive to provide an assessment of the quality of a structure and highlight specific concerns by considering the model coordinates, experimental data, and fit between the two. RCSB PDB Structure Summary pages contain the "slider" graphic that provides a visual summary, and link to the full report (PDF).

The Color 'By Density Fit' and 'By Geometry Quality' options map wwPDB Validation Report information onto the 3D structure. Clashes can be displayed as pink disks using the "Clashes" toggle. 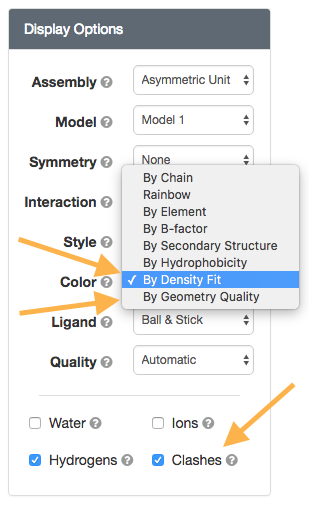 For structures determined using X-ray crystallography for which structure factors have been deposited, the "Density Fit" scheme colors a structure according to the quality of agreement between the model and the experimental electron density. Blue indicates a good fit for a residue and red a bad fit. Residue coloring is determined using normalized Real Space R (RSRZ) for polymer residues and real space correlation coefficient (RSCC) for ligands. Colors range from red (RSRZ = -2 or RSCC = 0.678) - through white - to blue (RSRZ = 0 or RSCC = 1.0):

The images below have been colored using the "Density Fit" scheme. On the left is a structure of Endoglucanase A (PDB ID 3WY6) with a generally good fit; on the right a structure of Ribonuclease P protein component 3 (PDB ID 3WYZ), which has areas of more problematic fit. For details regarding RSRZ and RSCC, please consult the Validation Report User Guide for X-ray structures. 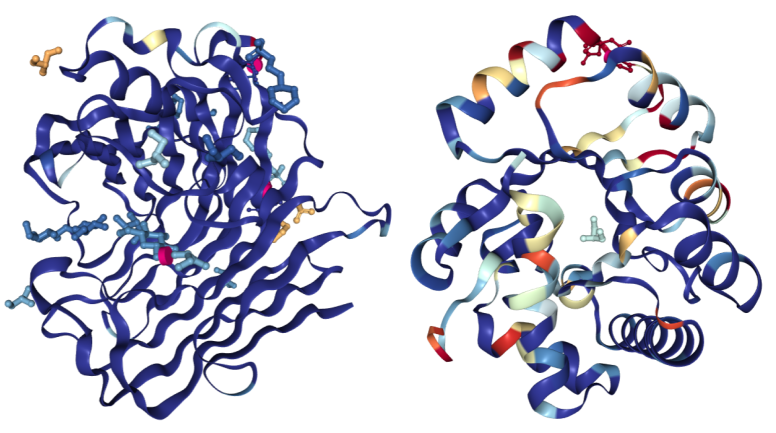 The "Geometry Quality" coloring scheme colors each polymer residue and ligand molecule according to the number of geometric issues (blue for 0, yellow for 1, orange for 2, and red for 3 or more):

Protein residues and nucleotides are colored per residue whereas ligand molecules are colored per atom. Possible geometric issues include steric clashes, Ramachandran or RNA backbone outliers, and sidechain conformation outliers. 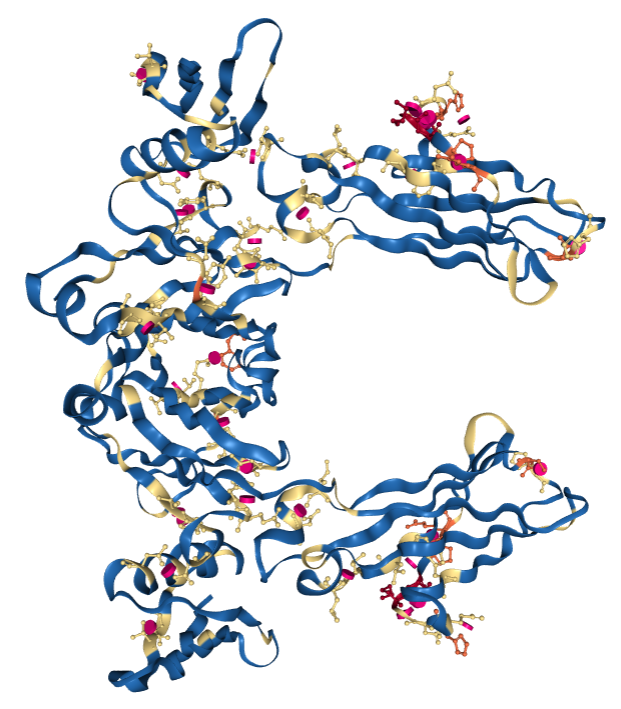 With this option, clashes between pairs of atoms are displayed as pink discs, with the size of each disc reflecting the degree of van der Waals (vdW) overlap between the two atoms. Clash display is currently not available for structures comprising more than 10,000 residues. Information on how these geometry quality criteria are calculated is available at wwPDB.org.

In the image below a clash between two atoms in entry 1D66 is indicated by a pink disc, showing how much the atoms' vdW spheres overlap. In this example, the structure has been colored using the "Geometry Quality" scheme, which indicates that this clash is the only geometric issue for these two residues. 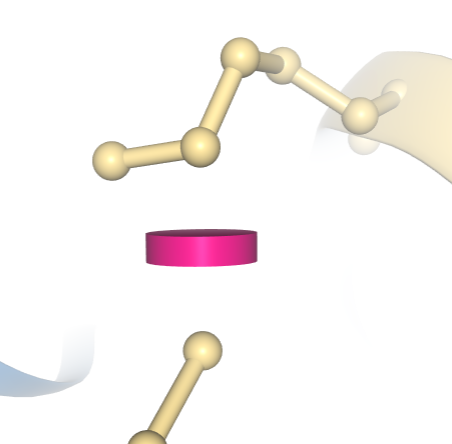 A clash between two atoms in PDB ID 1D66 is indicated by a pink disc, showing how much the atoms' vdW spheres overlap. In this example, the structure has been colored using the "Geometry Quality" scheme, which indicates that this clash is the only geometric issue for these two residues.

Hydrogen bonds [Stickle1992], [Zhou2008] are calculated according to the following parameters between donor and acceptor atoms.

Donor atoms: In general all nitrogen, oxygen, and sulfur atoms that have a hydrogen count greater 1 according to our valence model can be considered donors (for carbon as a donor see the heading Weak Hydrogen Bonds). Any nitrogen in a His ring may also be a donor.

The maximum donor to acceptor distance is generally 3.5 Å and 4.1 Å for bonding with sulfur atoms. Angles are checked according to the following guidelines:

Halogen bonds [Auffinger2004] are calculated according to the following parameters: Donors can be X-C, where X is Cl, Br, I or At but not F (no sigma-hole). Acceptors can be Y-{O|N|S} where Y is C, P, N, or S. The maximum Halogen bond distance is 3.5 Å. The maximum angle deviation is 30 degrees optimal in which the C-X···O angle ≈180° (consistent with a strong directional polarization of the halogen) and the X···O-Y angle ≈120°.

Hydrophobic contacts [Freitas2017] are calculated according to the following parameters: Contacts are made between carbons that are connected only to carbon or hydrogen, the default maximum hydrophobic distance is 4.0 Å, for atoms that interact with several atoms in the same residue, only the one with the closest distance is kept, and hydrophobic contacts between pi-stacked aromatic rings are removed.

Pi-stacking interactions [McGaughey1998] are the parallel or T-shaped stacking of aromatic rings. The aromaticity of a ring is deduced from flags of its member atoms (when available) or by checking if the ring is planar and contains only B, C, N, O, Si, P, S, Ge, As, Sn, Sb, Bi atoms. These interactions are included when the maximum distance between ring centers is 5.5 Å. The maximum offset of ring centers is 2.0 Å (about the radius of benzene plus 0.5 Å), the maximum deviation from optimal angle (0 for parallel, 90 for t-shaped) is 30 degree.

These two maps are then used to correct the model when possible. Even in the best quality structures, there are areas of poor electron density, which may represent sections of the model that exist in multiple conformations. This can be seen in long side chains or surface loops of the model.